Partial count for the office of Grand Master of the Grand Orient of Brazil: Marcos Jose da Silva 54% and Mozarildo Cavalcanti 39,7%

Brasilia, Brazil. The Masonic Electoral Tribunal of the Grand Orient of Brazil will count today votes from São Paulo. In the state of São Paulo there are about 21,000 members of the GOB. After counting and validating the total votes, TEM will announce the winner. 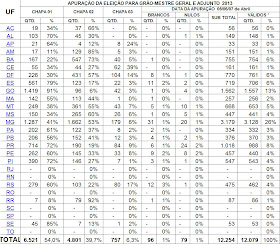 At this moment, Marcos Jose da Silva, the current Grand Master and President of the IMC leads with a total of 6,521 votes (54%), followed by Senator Mozarildo Cavalcanti with 4801 votes (39.7%). 1% of the votes were canceled and 1% were white votes.